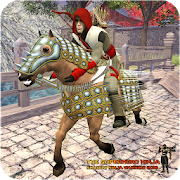 Let's play and endless action & thrilling ninja game, where you'll learn real ninja and kung fu fighting styles. It is a pack of kung fu games and real ninja fighting games. The shadow ninja warrior 2019 is a deadliest fighter, there is no mercy for all the enemies. Superhero Ninja warrior cut the enemies body parts in single second. He is a well trained samurai warrior, he can fought couple of enemy fighters at a time and will beat them.

This epic fun loving superhero ninja game contains multiple levels with secret missions each levels contains different environment and physics of game play. In this wildest 3D action game you are going to play as wildest angry superhero ninja samurai saga fighter. You have been hired to complete secret mission where you first task ex general of a empire to save the land. Your main secret mission is to go after murder of the real king of a kingdom. By your journey you will deal with his army and have to kill their soldier as much as possible. To get him it is not going to be easy so you've to prepared yourself mentally and physically very smartly. There are awaiting for you many traps, obstacles and enemy commando soldiers on the way.

â©ï¸ Start your action superhero ninja samurai game with checking all weapons
â©ï¸ Secret mission to save a land of ex general
â©ï¸ Kill the traitors army, who murdered your king
â©ï¸ Be a rooftop samurai and reach Kings place at mountains
â©ï¸ Finish the level and get gold coins

You will have to fight out your enemies with your superhero, kick, punch, slash through them like a real ninja hero or just climb away to disappear from the enemy area. Don't get hit and take risk if you know how to move in shadows. Be a superhero ninja man and stand against traitor, kill all the enemies and take revenge his army who murdered your king with disloyalty. Use iron and gold action superhero ninja swords, axes, hammers or bone bow to clear your way and vanish these traitors. You can buy them in the shop for gold you can find behind secret missions enter. With super equipment your super ninja hero can reach almost immortality. Sneak and wait for good opportunity to hit in right moment finish all the enemies as rooftop samurai.

Climb to top of the mountains tops and jump down to water as rooftop samurai to finish your fight creed assassination. You can also pick stealth approach and use your samurai, extreme sneak, spy skills. Unaware from your mercenary enemies you can finish the level like a superhero real super ninja rising shadow hunter without of need to gear up and crime combat.