Categories: Board by: Livio Reviews: 3.9

Reversi (a.k.a. Othello) is a board-game based on a grid with eight rows and eight columns, played between you and the computer, by placing pieces with two colored sides. This application is free and without any advertisements.

Game features
- Powerful game engine.
- Hint feature: the application will suggest next move for you.
- Undo last moves by pressing the back button.
- Gain experience points (XP) by earning game achievements (sign in is required).
- Compare your score against other players on the leaderboards (sign in is required).
- Import/export game on local and remote storage.
- Game engine performs multiple moves in case you have no valid place to go, due to the well known rule "If one player can not make a valid move, play passes back to the other player".

Game settings
- Level: select the level of game, between 1 (easy) and 7 (difficult)
- Select if the application has to play with white or black; select human vs. human mode
- Show last move
- Show valid moves
- Show emoticon (active only during last part of a game)
- Show game animations
- Optional voice output and / or sound effects

Game rules
Each player must place a new piece in a position that there exists at least one straight (horizontal, vertical, or diagonal) line between the new piece and another piece of the same color, with one or more contiguous opposite pieces between them.

Black color starts first move. When player cannot move, the other player takes the turn. When neither players can move, the game ends. The winner is the player that owns more pieces.

IMPORTANT NOTICE FOR BEGINNERS: our game performs multiple moves, as any similar application, only in case you cannot move as you don't have any valid place to go, i.e. when you have to pass your turn according to well known game rule "If one player can not make a valid move, play passes back to the other player".

In case you perform the optional signin, the Reversi application can access your Google Play Games profile. 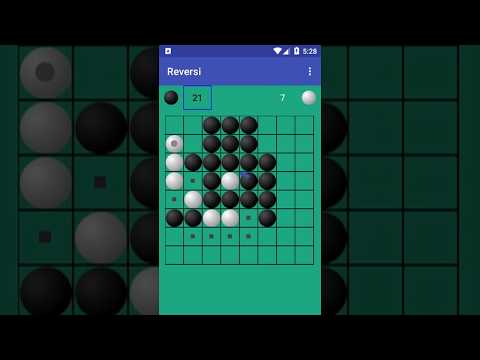