See the Earth as the astronauts see it with a 24/7 video livestream from the International Space Station.

If you like space or astronomy then you will love ISS Live Now.

ISS Live Now gives you easy access to a live video feed of Earth from the International Space Station, which is orbiting about 400 kilometers (250 miles) above the planet. The app provides an exciting experience marked by thoughtful design and features numerous customization options.

The app utilizes the native Android Google Map (ISS tracker), which allows you to follow the Space Stationâs orbit around our planet. You can zoom, rotate, drag and tilt the map; choose between different types of maps (such as satellite or terrain); and view data such as the speed of orbit, altitude, visibility, latitude and longitude, and even what country the Station is above at any moment in time. All of these options are easily customizable from the settings menu.

You will have seven different sources of live video streaming, including:

1. Live HD camera: A wonderful HD video stream of our planet.
2. Live standard camera: It shows a live stream of the Earth and, from time to time, details about the ISS (like tests, maintenance and communication with Earth).
3. NASA TV: The television service of the United States government agency NASA (National Aeronautics and Space Administration). You can watch science and space documentaries, interview with scientists, astronauts, engineers and personalities such as Elon Musk.
4. NASA TV Media.
5. Spacewalk (recorded): Beautiful HD images of astronauts from cameras outside the ISS.
6. Inside the International Space Station: Take a video tour of each module inside the ISS, all explained by the astronauts.
7. Eventual channel: Temporary live cameras from NASA, the European Space Agency (ESA), the Russian Space Agency (Roscosmos) and the SpaceX.

You can also watch these live feeds on your television via Google Cast.

You even have the option to be notified when the next sunset or sunrise will occur, allowing you to watch it live directly from the International Space Station.

Do you want to see the ISS in the sky at night?
This is the easiest way to spot the Station. With the built-in ISS detector tool, ISS Live Now will tell you when and where to look for the Space Station. Youâll receive a notification a few minutes before it passes by your location.

You can also choose to be notified when the ISS is about to pass over your region during the day, allowing you to admire your country from space.

Other notification options include special events, such as spacewalks.

Thanks to Google, aspiring astronauts can now simulate the experience of floating on the International Space Station (ISS). The company worked with astronauts to provide a Google Street View of the low-orbit satellite, from its science labs to its beautiful Earth-facing Cupola window.

Note:
When the ISS (International Space Station) is on the night side of Earth, the video image is black, which is normal.

Sometimes, video is not available due to transmission issues, or because the crew is changing cameras. In such cases, you will usually have a blue or blank screen. In a few minutes the transmission should return, so, please be patient. This is not a problem with the app. 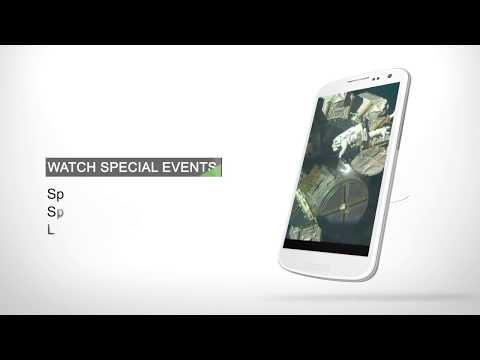