The gates of hell have been flung open once again and the western world has been plunged into chaos and disarray. The governors are mobilizing their troops to recapture the glorious city of Rome and war is to be triggered at any moment! Are you ready to march alongside the conqueror Caesar to claim the throne and secure domination over this greatest empire known to civilization?

Game highlights
--- Command millions of troops in brutal PVP, real-time, round based combat! ---
â¢ Recruit hundreds of epic warlord heroes including Alexander, Whitebeard and Medusa to fight under your banners and slay your foes before you!
â¢ Expand your power: With hundreds of cities to claim as your own, fight to ultimately occupy and secure domination over Rome, claiming the throne of Emperor to reflect the nobility you deserve!
â¢ An arsenal of weapons to utilize: Fire a ballista to signal the start of battle and then deploy crossbowmen, cavalry, siege engines and infantry to wield the diplomacy of war and become the conqueror of those who stand in your way.
â¢ A huge world map brimming with barbarian camps, the gates of hell and the magnificent royal garrison of Rome! March to claim whatâs rightfully yours today and secure your civilizationâs seat of power for millennia to come.

--- Rich and immersive gameplay! Command your troops and claim the crown of a conqueror in this age of legends! ---
â¢ Alliance system: Recruit members, create alliances with other warlords and employ their help to build your civilization from nothing!
â¢ Battle for the throne of Rome: Join alliances to massacre your foes and their garrisons in real-time combat. The strongest commanders are waiting to meet their match in the game of domination over this realm of violence and brutality!
â¢ The World Boss: Featuring a myriad of BOSSES including, the Dragon, Vampires, The Headless Horseman, Sirens, Centaurs and other creatures both mythical and magical from across the realm. To be the strongest slayer! Channel your inner Alexander and put down any foe that stands in your way!
â¢ Exploit legendary equipment: Collect thousands of easily accessible materials to forge your ideal pieces of equipment. With hundreds of forms to choose from, there are dozens of fabled suits for you to wage your war for domination in.
â¢ March at the head of your legion and earn your reputation as a warlord and conqueror as you bide your time to claim the title of Emperor. Secure victory in battle, defeat wild monsters and expel barbarians to raise your nobility level. Display your capabilities as a leader of the empire to dominate and fight your way to the top of civilization. Donât stop until you emulate Caesar and sit on the throne as King! 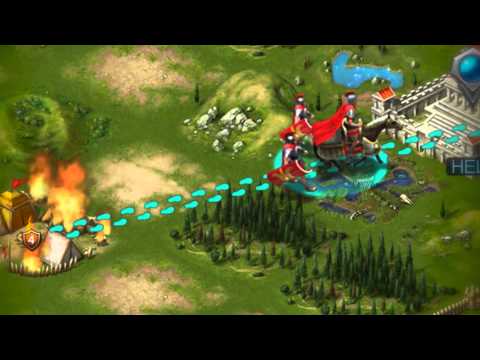