Hit The Brick - an addictive and challenging Bricks Breaker Game that you will spend many evenings playing. Hit the brick is an enhanced version of the popular bricks breaker game.

What is Bricks Breaker type game?
Bricks breaker is an arcade game where you take time to aim balls, so when they bounce they destroy bricks. The goal is to break as many bricks as possible so as they go down they don't overwhelm you.

How to play Hit The Brick?
* Touch the screen and swipe towards the top.
* If you want to stop aiming, swipe with your finger below the level you first touched the screen.
* If you want to make sure that the line will not move when you releasing the balls, hold the finger for 4 seconds to freeze the line.
* When the aim line is in the place you want, release the finger.
* A load of balls will be released, hitting the bricks and bouncing off them.
* The number on the brick means how many times a ball has to hit it to destroy the brick.
* After all the balls feel down, the game is starting the next round. That means you have another load of balls to use and the game is generating a new line of bricks to break.
*Our bricks breaker game spawns 4 kinds of additional items:
- The ball (always) - When you hit it, you will receive additional ball next round.
- Power Ups ( sometimes) - Each Power Up has a different ability which will help you break the bricks. Use them wisely because, if even a single ball will touch the Power Up, the Power Up is considered as used and it will disappear in the next round.
- Skull (sometimes) - A âpower upâ that will eat your balls. It can get you in trouble.
- Stars (sometimes) - break breaker currency.

The goal is to achieve the highest score possible by destroying the bricks as they come.
When you achieve your high-score, compare it with other players.

Stars
Stars in our Bricks Breaker are the internal currency.
You can use stars to pay for:
* Undo last shot
* Additional life
* Creating a checkpoint
* More balls

How to get Stars?
* Gather stars as they spawn during the game
* Watch an ad every 20 minutes to get 20 stars
* Buy them

Checkpoints
You are awarded with a checkpoint when you break all bricks on the screen.
You can use checkpoint after you lose, to continue the game from that level. When you start from the checkpoint you start with a clear screen and with additional life. In other words, itâs almost like âsaveâ.

When your âlivesâ are gone, you can start from the checkpoint instead from the beginning. If you didnât manage to get one, you can buy one paying with the stars.

Tips to achieve a higher score.
The number on the brick means number of hits required to break the brick. You should try to bounce the balls so they move between top of the screen and top layer of the bricks. Then the number of bounces for each ball will be the largest causing more damage.

Sacrifice balls
Sometimes the way to the top layer is blocked by a brick. It could be a good idea to sacrifice most of the balls, so only a handful move over the top layer. Even a small amount of balls can break many bricks. 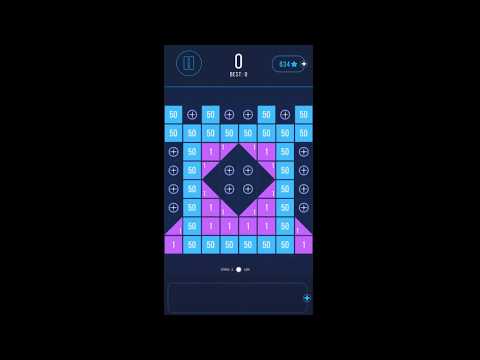